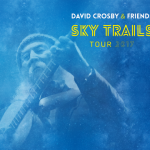 29th via BMG. The folk rock legend will support the release with a 25-date tour that starts October 30th in Chicago, IL and has only one tour date in Canada, in Montreal, on November 10, 2017.

The band backing Crosby will feature his son James Raymond on keys, Mai Agan (from Estonia) on bass, Steve DiStanislao on drums, Jeff Pevar on guitar and Michelle Willis on keys and vocals.