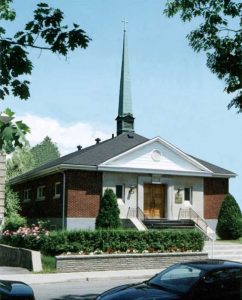 About 80% of the population in pre-WWII Estonia were Lutherans, with the remainder mainly Russian Orthodox Christians. The country, which had become an independent republic in 1918, was annexed by the Soviet Union in 1940. In 1941 it was occupied by Nazi Germany. When in the fall of 1944 the Germans withdrew and the Soviets reoccupied the country, nearly 10% of our population became political refugees in the West.

After the end of World War II, some fifteen hundred Estonian refugees settled in Quebec, mainly in Montreal, where a small community had already existed for several decades. In January 1949, Pastor Karl Raudsepp organized the first Lutheran Worship Service in the Estonian language in St. John’s German Lutheran Church on Jeanne Mance Avenue. Two years later, on September 16, 1951, with Pastor Raudsepp as minister, the Estonian community organized itself into an official congregation, according to the Constitution of the Estonian Evangelical Lutheran Church in Exile. On January 2, 1952, the congregation was granted membership in the Canada Synod of the United Lutheran Church in America, giving the congregation all the legal rights granted to Churches in Canada.

In the summer of 1954 the congregation purchased a church building on 4345 Marcil Avenue, near Monkland, in NDG, where the first Service was held on November 1. In addition to housing the weekly church services, those premises also became the centre for all the activities of the dozen or so cultural and secular organizations of the Estonian community in Montreal.

Having been elected Bishop of the Estonian Evangelical Lutheran Church in Exile, Pastor Karl Raudsepp left Montreal and was replaced by Pastor Heino Laaneots from England in 1976. By the time of this changeover the membership of the congregation, which at its peak had been about 1,300, had been reduced to about 800 and continued to shrink. Many of the younger generation left the province to take up jobs elsewhere, leaving their parents and other older members of the community behind. Since the year 2000, the membership has fallen to about 200 people. Today, although the pensioners’ club remains the most active activity at the church, there are signs of a cultural rebirth sparked by younger members of the community who are working to revive the cultural activities that once flourished in the church hall. 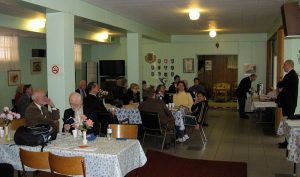 The Montreal Estonian Pensioners Club was established in 1978 when many of the Estonians who had settled here during the 1940s and 1950s had reached retirement age. Encouraged by the pastor of St. John’s Estonian Ev. Lutheran Church, Rev. Heino Laaneots, a group of seniors led by Edgar Heinsoo worked out the constitution of the club, which was approved at the first meeting held on October 15 1978. There were 45 people in attendance and they became the first members of the club. Edgar Heinsoo was elected president, a position he held until 1982.

The club normally meets twice a month on Friday afternoons in the St. John’s Lutheran Church hall. A light snack is served starting at noon which is usually followed by a presentation in the form of a video or lecture, which begins at 1:00 p.m. The membership fee is $10. per year for anyone.

The club has also undertaken to provide financial assistance to several organisations in Estonia, such as the building of the Memorial Wall in Vaivara, Sinimägedes, Tallinn’s Children’s Hospital Foundation and the Estonian Street Kids Project. 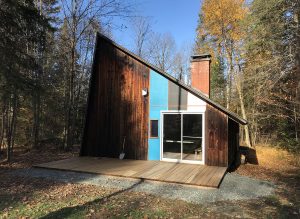 Lättemäe is owned and operated by the MES, as of 2014. The Montreal Estonian Youth Welfare Association, Inc. (MEYWA) was formed in 1956 to provide youth of Estonian heritage the opportunity to enjoy camping and other outdoor activities. To this end, 100 acres of land was purchased from a local farmer in 1958. Located in the Laurentian foothills, approximately 90 km northwest of Montreal, this area became known as Lättemäe. In the ensuing years the infrastructure, including roads, a bridge, a community building and outdoor kitchen facilities, was built.

Until the mid-seventies, Lättemäe was a busy place, with numerous Guide and Scout camps, summer outings, cross country ski trips and ethnic celebrations (Jaanipäev). With the decline in the Estonian community, these activities began to wane and Lättemäe went into hibernation in the 1980’s.

A rejuvenation occurred in 1992 with the first family camp, organized by individuals who had spent their youth at Lättemäe and wanted to pass the experience on to their own children. This family camp has become an annual event, attracting a large contingent of people from Montreal and Ottawa as well as participation from Toronto, Vancouver and the U.S. The facilities have also been used for three confirmation camps as well as outings with groups from Estonia.

People interested in supporting the MES and Lättemäe, or in using its facilites should contact the MES at: