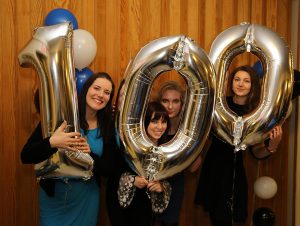 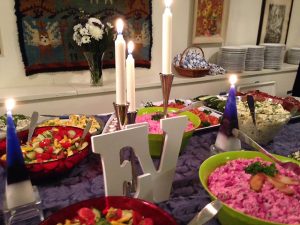 How and where do you display the sentiment of pride and joy in celebrating the centennial anniversary of a small country that has faced unbearable hardship and still survived? The existence and growth of such sentiment does not depend on vastness of space, but on the strong will and spirit of people holding that sentiment. Perhaps then, it was more than appropriate that Montreal Estonians and their friends gathered in their familiar Jaani kirik (St. John’s Church) on Saturday afternoon February 24th.

The church, much like Estonia in a huge world, may seem small in the middle of a big Canadian city. But small size, be it of a church or Estonia itself, has never stifled the will and spirit of Estonians to exist and endure.

The Montreal Estonian Society, led by President Karl J. Raudsepp, once again, incarnated that will and spirit by organizing a celebration and reception in honour of Estonia’s 100th birthday. The festivities began with the rebroadcast of the celebrations in Estonia, including concerts and President Kersti Kaljulaid’s speech. These events succeeded in transmitting, the joy and the deep feeling of pride shared by all Estonians and their friends in Estonia and throughout the world on this particular February 24th.

In observing the celebration in Montreal, it needs to be noted, not merely the participation, but the contribution of the non-Estonian spouses and friends that made the event, as others in the past, so successful. As Ambassador Gita Kalmet has stated on a previous occasion:

“… a significant role in our Estonian community is played by its non-Estonian members – spouses, sons and daughters-in-law, mothers and fathers-in-law. Without their support, our events would not survive. I’m thinking here of those Estonians I know, especially those who maintain and advance Estonian activity with such passion. We often forget that many have spouses who are not Estonians, since they are so much part of us and often more enthusiastic about things Estonian than their spouses …”

In the best Estonian tradition, no celebration is complete without food and drink. After the celebration in the church, the gathering moved to the church hall where a whole team, led by Kersti Leetmaa, had prepared a veritable feast, which the Estonian term, külm laud really does not do justice. This magnificent buffet was a reminder that to achieve the aspirations of the will and spirit, the time and toil of many volunteers are also necessary. The Montreal Estonian Society has a wealth of such members, which ensured the success of this memorable Estonia 100 celebration.