Welcome to the new Montreal Estonian Society website. Your executive has undertaken to renew the MES website this summer and has tried to incorporate the suggestions which have been made since we launched our initial site more than two years ago. We hope that this version meets with your approval. It is, of course, a work in progress, and we invite you to send your comments and suggestions to: info@mtlmes.ca

It is our intention to keep you abreast of Estonian related developments that are relevant in the local context and to regularly update the website with any breaking news of interest to our community. We therefore invite everyone to keep us in mind, and to keep us informed of upcoming events and of any news that features or involves Montreal Estonians. 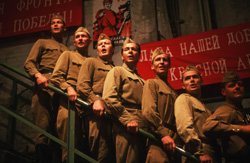 The production will be playing at the Casgrain Theatre from August 27th to September 13th.

Matthew’s recent stage credits include Cervantes/Sancho in Canis Tempus Theatre’s "Quixote"; Lucky in "The Emptiest", an adaptation of "The Tempest" which he directed with his theatre company Second Body Productions; and Romeo in Gravy Bath Productions’ "Gayanashagowa", an adaptation of "Romeo & Juliet". Film and TV credits include: "Dead at 17"; "Durham County"; and "Picture This!". Matthew is a graduate of the John Abbott College Professional Theatre Program where he received the Pamela Montgomery Award.

**UPDATE** The Singing Revolution is being held over in Montréal at the Cinéma du Parc, August 15th through next Thursday, August 21st!